You are at:Home»New in CSDev»BCSDN News»BCSDN Background Analysis of the EC Enlargement Package 2021: EU, Are You Still Committed to Empowering Civil Society? 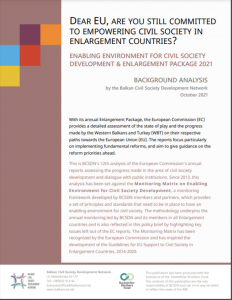 For the 12th consecutive time, BCSDN has prepared an analysis of the annual European Commission Enlargement Package, assessing the progress made in the area of civil society development and dialogue with public institutions in Enlargement countries. The background analysis is set against BCSDN’s Monitoring Matrix on Enabling Environment for Civil Society Development.

This year, the Enlargement package comes at times of a critical standstill of the enlargement process. A new veto for North Macedonia, this time by Bulgaria, has prevented the start of the accession process for both North Macedonia and Albania, despite the favourable decision of the Council from more than a year ago. The visa liberalisation for Kosovo has also not been implemented. With no country advancing in the accession process, the EU’s credibility has been put under question. The frustration and concerns that the EU membership is becoming an unreachable goal have been growing among the citizens and the civil society, which was once the strongest driver for EU integration.

Based on the detailed assessment of the state of play in each enlargement country, overall, the EC positively notes the continued reforms in Albania and North Macedonia. A more critical assessment is made for Bosnia and Herzegovina (BiH) and Kosovo, noting that the political environment hindered overall progress on the key priorities in BiH and that Kosovo is still to complete effective implementation of the reform action plan. The accession negotiations with Turkey continue to be on hold due to “serious concerns on continued deterioration of the rule of law, fundamental rights and the independence of the judiciary”. Both Montenegro and Serbia is said to have ensured an “overall balance in the progress under the rule of law chapters and progress in the accession negotiations across chapters”. Civil society continues to be separately assessed within the Political criteria as one of the four pillars of Democracy, yet again, non-systematically, inconsistently, and in varying detail across countries.

The detailed reports aim to present “a factual and fair assessment as well as a clear roadmap to accelerate and deepen reforms”. However, at times, the EC has presented a bleak assessment or omitted developments that are vital for civil society and its development. Even in cases where local CSOs have been vigorous in their advocacy efforts and public reactions on both national and international level, their concerns seem to have not been heard by the EU Commission. Whether this is a result of an intentional trade-off between diplomacy and a critique when it comes to stronger support to civil society, or a lack of interest and de-prioritizing the importance of civil society on account of other issues – both scenarios are equally concerning.

The full analysis is available here.