You are at:Home»New in CSDev»BCSDN News»BCSDN at the UN Event on Expanding the UN Civic Space Toolbox 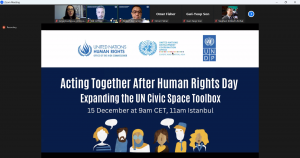 On 15 December, BCSDN’s Policy and Advocacy Coordinator, Anja Bosilkova-Antovska, participated in the online event “Acting Together after Human Rights Days: Expanding the UN Civic Space Toolbox”. The event was organized by several UN actors, such as Development Coordination Office, UNDP, and OHCHR, and was attended by around 50 UN staff across the region of Europe and Central Asia.

The event aimed to explore the implications of shrinking civic space and the UN’s action, such as what can the UN do to protect civil society actors at risk from either state or business actors, or how to ensure that as many different voices as possible are included in UN planning and programming processes. Mrs. Bosilkova-Antovska was one of the key panelists, along with Francesca Fanucci from ECNL, Gevorg Ter-Gabrielyan from the Eurasia Partnership Foundation, and the UNDP BiH Deputy Resident Representative Stephen Kinloch Pichat, discussing the key trends on civic space at regional level and effective strategies to address the challenges resulting from shrinking civic space. After the panel discussion, participants discussed the 3 Ps of participation, protection, and promotion, based on the UN Guidance Note on the Protection and Promotion of Civic Space, including concrete examples of what the UN can do or is doing to help address these challenges. 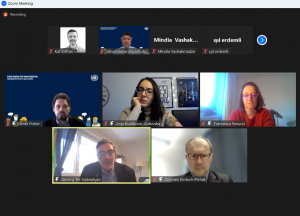 Mrs. Bosilkova-Antovska’s intervention focused on the factors of shrinking of civic space in the Western Balkans and the increasing threats to civic freedoms, despite the legal guarantees of basic freedoms in place. She stressed the obstructions to the freedom of expression and assembly, with violations noted mostly in Serbia and Bosnia and Herzegovina, as well as the problematic issues around the rising numbers of GONGOs and PONGOs, and the effects of new anti-money laundering regulations on CSOs’ daily functioning. As an antidote to these challenges, she mentioned that CSOs must engage with the citizens and mobilize their support by building positive narratives around the civic space, find new spaces for action by utilizing the potentials of digitalization, and build partnerships with the media, academia, private sector, donors, INGOs and other stakeholders that share the responsibility for protecting and promoting the civic space. 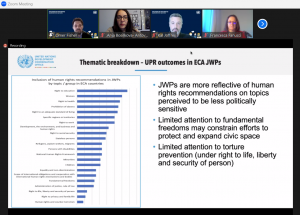 Being one of those stakeholders, the UN should ensure CSOs have a seat on the table in policy and decision-making processes while joining their advocacy efforts, utilize CSOs’ data-gathering and evidence-based advocacy capacities, while further investing in their capacities, and make CSOs part of the UN programming, implementation, and monitoring. Noting the momentum for locally-led and owned development, Mrs. Bosilkova-Antovska noted that it is problematic when local processes are owned by projects implemented by international organizations or UN agencies, and not by local actors, putting under question the sustainability of project results and ownership of development and reform processes at country level. The UN must carefully design programs and specific project interventions, where relevant local actors will be in the driving seats.

The group work discussions noted similar issues, such as the critical convening role of the UN and its ability to act as a bridge between CSOs, NHRIs, and government and to organize regular dialogue roundtables at regional level focused on thematic areas and with roadmaps, the ability of the UN to use sensitive advocacy, public statements and quiet diplomacy where needed, the need to work with smaller CSOs and grassroots even when funding is not available (to build their capacities and enable them to speak up, and engage civil society in UN’s work, beyond UN events.