You are at:Home»New in CSDev»BCSDN News»Civil Society As an Important Partner in the EU Integration and Democratization Process in the Balkans

Around the event gathered the representatives of the APRODEV partners, of the European Commission delegations and of the national governments. Press conference was also organized for local and regional media to expose the event to the wider public. The workshop opened by Ambassador Chiarini, Head of the EC Delegation in Macedonia, focused on the exchange of best practices and lessons learnt throughout the region on how to strengthen the role of the Civil Society Organisations (CSOs) within the framework of the EU integration process. Some of APRODEV partners present at the workshop are also partners of the Balkan Civil Society Development Network, among them Diaconia Agapes, MCIC, EHO and EOS.

Specific recommendations were produced for the three stakeholders involved: the CSOs, the national governments and the EC Delegations. 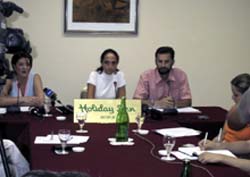 The CSOs were urged to adopt an active policy of cooperation vis-à-vis the national governments and the EU in sharing their grass-rooted expertise particularly in terms of interethnic relations; to promote the joint policies and activities throughout the region and the EU democratic values and principles by means of awareness raising activities.

The governments should promote open and transparent policy dialogue with the CSOs while appointing at least one CSOs-Liaison person within the government structure. The issue related to transparency in terms of funding and policy issues was as well considered tantamount. The government should as well promote the growth of national CSOs platforms and/or fora which would represent a regular source of contacts and exchange between the central and local bodies and the CSOs.

On the other side, the EC role should support awareness raising activities in order to promote the understanding of the EU integration policy within the wider public in the Western Balkans. One of the most delicate issues was related to the sort of funding available for the CSOs in the region as it appears that, most of the time, the financial contractual obligations, within the framework of the Call for Proposals opened by the EC Civil Society As An Important Partner In The Eu Integration And Democratization Process In The Balkansat 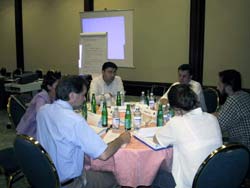 national and regional level, include high budget thresholds which are difficult to be reached by most of the CSOs. By differentiating the thresholds of budget requirements by taking into account the many qualitative and quantitative differences of the Balkans CSOs would make the competition between the CSOs more just. At the same time the funding should be differentiated in order to target and alleviate some major poverty related situations mostly affecting the vulnerable groups in the region: women, children, elderly, disabled and minorities. Particular attention in terms of funding should address the conflict prevention needs of the region.

Within the framework of the Millennium Development Goals and the EU integration process which is slowly moving onto the Western Balkans, the CSOs, the national governments and the EC have thus a joint role to play by enhancing the coordination of their development projects and programmes in order to effectively fight against regional poverty and ethnic tensions. The Workshop presentations and conclusions will thus be published and presented to all relevant stakholders.