The training was delivered by a training team from two experienced networking organizations – European Citizens’ Action Service (ECAS) from Brussels and Center for Information Service, Cooperation and Development of NGOs (CNVOS) from Slovenia. The Feketic training was hosted by Ecumenical Humanitarian Organization (EHO) and Tirana training by Diakonia Agapes, both BCSDN members and partners. 34 participants from Albania, BiH, Bulgaria, Macedonia, Romania, Serbia and Montenegro attended the trainings.

The three day training agenda was divided into two parts. First day was devoted to networking. Darja Sekula Krstic and Marjan Huc from CNVOS presented best Slovenian and EU practices concerning horizontal and vertical NGO networking. Participants learned about different useful tools for operating a network (i.e. tools for transparent NGO representatives’ selection, analysis of benefits and traps of joining a network) and examples of successful lobbying. Importance of relationship between IT and networking was also stressed. In the afternoon session, main focus was on EU level of networking; what is experience of Slovenian NGOs, especially in the pre-accession period, role of EU institutions and networking, and presentation of CNVOS EU Networking guide. Participants were also involved in practical work through three working groups (good governance-cooperation between the State and NGO sector; support for disadvantaged groups of citizens; involvement of young people in life of community), which developed their own mission, vision, means of communication and membership policy. In groups and overall discussion, participants mainly discussed and exchanged experience on traps and benefits of participating or leading an international network, traps of funding-based networking and why cooperate in interest-based networks. 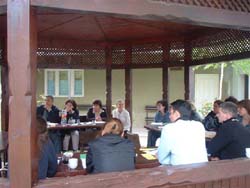 “…this I think was the very first organized gathering of the NGOs in the region. It was done in a transparent and inspiring manner. Participants expressed their commitment to network and joint efforts. I think we need more meetings like this in the region if we want to seriously work on development and reconciliation.”

The second and third day were devoted to development of project-based partnerships and cooperation. Tomas Findra from ECNO, Slovakia (as ECAS trainer) guided participants through theoretical knowledge on the topic. Participants learned about basics of partnership and cooperation, problem analysis, analysis of key stakeholders, objective-setting, analysis of strategies. Through the three working groups they developed further strategies for concrete actions, based on the presented theoretical knowledge. Each working group analysed the situation of an individual target group using analytical tools of the Logical Framework approach. This work provided participants with the opportunity to get a very clear picture of the problems they want to address as well as improvements necessary to be achieved. As the final output of each working groups an Action Plan has been created by each target group, indicating the sequence of the most necessary steps to be done in order to achieve improvements. Within the action plans there have already been expressed initial ideas of participating organisations to create common partnerships or networks.

In order to support participating organizations in further concrete development of partnerships and networks idea developed at the training, BCSDN has launched a call for proposal “Support to Exchange Activities in the Area of Mobilization of Resources”. The Call is open till 15 June, 2006. More information about the Call can be found here.