You are at:Home»Blogpost»The Future of the Enlargement Process and Civil Society Support

[Discussing the Future of the Enlargement Process and Civil Society Support] 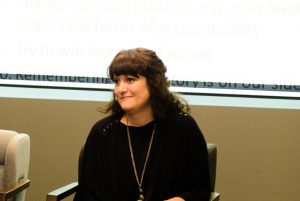 Not opening the negotiations for Albania and North Macedonia sent a clear message that there is a need to change the Enlargement process, but such a decision shows no regard to the citizens of these countries. The enlargement is not only a technical procedure – it has a real impact on the people, and the citizens of the Balkan countries are the ones that are losing the most. Citizens of the Western Balkans, as future EU citizens, need to be able to participate in the future processes of the EU and therefore they should be involved in the Conference on the Future of Europe discussions.

This conversation about enlargement should go far beyond the administrative checklist that is the enlargement process. The civil society from the region has been advocating for a renewed approach to the European Union’s enlargement towards the Balkans that would serve as a safeguard against the backsliding in democracy and rule of law that is apparent in the region. In order to have a process that brings legitimacy and transformative power, any future discussions for Enlargement should make clear that full membership is the final objective of the EU’s engagement in the region. Mixed messages about possible alternatives to a full EU membership are of help only to non-democratic and populist groups in those countries.

The pause on Enlargement comes at the same time as the EU debates its new funding instruments for the post-2020 period. This is a pivotal moment for the future of EU civil society support. The EU should finally demonstrate political support to non-state actors and recognize their role in the Enlargement by providing support mechanisms that go beyond statements and funding.

The DG NEAR has put time, efforts and funding into developing the EU Guidelines for Civil Society Support in the Enlargement countries, giving a clear message that civil society should play a significant role in the enlargement. However, for that to be possible, civil society needs a proper environment for action and further development. The message is yet to bear fruit. The document still needs to be officially adopted in order to have a political weight and legal basis for monitoring of the development of the civil society and its enabling environment in both in the EU and Enlargement countries. Such a monitoring framework should be an official EC document used by the EU delegations and DG NEAR with political weight and accompanied by regular implementation reports. It should be used for better programming of the financial assistance, but also for tracking the developments, reporting and taking political actions upon them. In this way, the EU will provide a common understanding of what constitutes an enabling environment, giving governments clear guidelines on what needs to be done in the area of civil society if the country aspires to become a member of the EU. At the same time, it will support CSOs’ arguments and advocacy efforts for ensuring open civic space and more genuine government – CSO cooperation.

BCSDN calls for political support of civil society and monitoring of the environment in which we operate have resonated with our partners and interlocutors in this debate. The forthcoming Carnegie Europe report that will come out of this process is indeed picking up on local needs such as the demand to streamline aid from Governments to civil society when democracy is failing, to mainstream civil society participation in sectoral policies in the enlargement processes and to emphasize the need to monitor and use the reports from EU-funded watchdog work when democratic standards and civic space is under serious threat to trigger a shift in where EU funding and support goes.