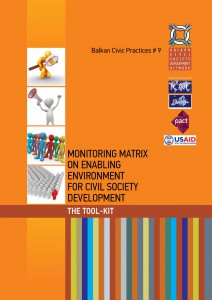 BCSDN members and partners have tested or participated for years in several monitoring methodologies developed to follow the enabling environment for civil society development (CSDev) or its parts. In most cases, these were funding and human intensive, partial (dealt with only one or several sub-areas) and general in their coverage of monitoring of the enabling environment for CSDev. Because of these reasons, and because of a shared concern that the complexity and connectedness between issues and (sub-)areas of CSDev have not been addressed extensively enough, BCSDN members and partners have in 2012 embarked on a process of creating the Monitoring Matrix for Enabling Environment for CSDev.

The Matrix predominantly discusses issues surrounding freedoms to form associations, foundations and non-profit companies as the most common forms in which the right is expressed.  The Matrix recognizes the existence of other forms (e.g., business associations, trade unions) and that some issues in this Matrix also extend to those other types of entities (e.g., participation in policy-making). However, for the sake of focus, clarity and consistency, the Matrix focuses on defining principles and standards, and on monitoring civil society organization (CSOs) in its narrower sense. It does not include trade-unions, churches, political parties and the like.  This is not to say that the Matrix cannot be used or adapted to monitor enabling environment in, for example, social dialogue issues; but that, at this initial point, the Matrix only focuses on the narrower, more commonly associated types of civil society and most commonly known as NGOs.

Developing the Matrix has been the most exciting, but at the same time the most challenging endeavour BCSDN has taken on since it was founded in 2001. We are as proud of the joint work done by BCSDN members’ and partners’ experts as we are motivated to subject the Matrix to scrutiny by CSOs colleagues and stakeholders. Through this scrutiny and the forthcoming review after a 1 year “test” period, our hope is that we can truly respond to and embrace the need of CSOs in driving positive change and the development of the environment in which they operate. Such change and development will allow them to fully contribute to their communities in creating positive societal changes.

Finally, we would like to thank the experts involved in the development together with ECNL as well as USAID, Pact. Inc, and ICNL for their support of the overall process of expertise, workshop and publication of this Tool-kit, which was provided under the Legal Enabling Environment Program (LEEP)/Legal Innovation Grant. We also thank the Balkan Trust for Democracy (BTD) which financially supported part of the work of the experts.