You are at:Home»New in CSDev»BCSDN News»BCSDN at the EU – Western Balkans Summit: “Shifting the narrative – a revitalized approach to the Western Balkans”

The 2021 EU-Western Balkans Summit organized by Friends of Europe took place on the 7th of December. The Summit aimed to engage with the overlapping and interlinking themes, to promote new and progressive voices, and to foster pathways to regional cooperation, resilience, and inclusion, amplifying the voices of women, youth, and alternative leadership in structural development such as digital transition, green transformation, increased regional cooperation and the strengthening of democracy and rule of law.

The event was kicked off with a pre-summit youth event – roundtable “Young Balkan Voices – Listening to the next generation”. It gives the youth of the region space to speak up on current issues and the policymakers a chance to listen and engage with the upcoming generation to transform the narrative around the Western Balkans and make the region an attractive prospect for their futures.

The official summit was open with a session dedicated to the trade and the investments – “Trade and Investment – a question of geopolitics?” – a topic discussed by the former prime minister and former minister of finance and former foreign minister of Montenegro – Mr. Igor Luksic and Secretary-General of the International Chamber of Commerce (ICC) Albania – Mr. Jamie Shea.

The second session was dedicated to COVID – 19 recovery process and sustainability. In the session titled “A Sustainable Recovery – looking towards the future” Executive Director of the Innovation Center Kosovo – Mr. Uranik Begu, Secretary-General of the Regional Cooperation Council – Ms. Majlinda Bregu, and Assistant Secretary-General of the United Nations – Ms. Mirjana Spoljaric-Egger, discussed the EU involvement in the Western Balkans Recovery trough the Economic and Investment Plan and the private sector role in the process.

BCSDN Executive Director spoke at the third session, dedicated to the impact of the local and the regional governments on the development of the Western Balkans, the governmental support to the grassroots initiatives, and the private-civil sector partnership towards promoting alternative leadership opportunities. The other panelists on this session, titled “Talking to the inside out: new routes for bridging the gap”, were the Macedonian Minister for Education and Science – Ms. Mila Carovska, the Serbian Minister for Human and Minority Rights and Social Dialogue – Ms. Gordana Čomić, the EU Commissioner for Neighbourhood and Enlargement – Mr. Olivér Várhelyi and the Mayor of Tirana – Mr. Erion Veliaj.

“…the health of the civil society is not made up only of its resilience and ability to adjust. And evidently, it has not been immune to the global negative trend of shrinking of the civic space: Although the situation varies from country to country, the basic freedoms have been under attack in the region, especially the freedoms of assembly and expressions.”

If you missed the discussion,  it is 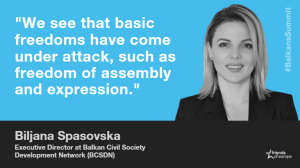 available on this link.