You are at:Home»Blogpost»[BLOG] Hot July in Belgrade 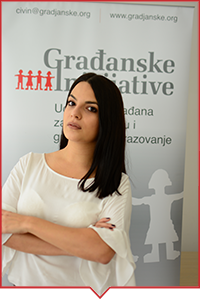 “The Corona virus has been defeated!”- these are the words that the authorities in Serbia used to address to their citizens, at the beginning of May, when almost all measures in the fight against the Covid-19 epidemic were relaxed in order to continue the election campaign and the holding of parliamentary and local elections on 21 June.[1] After the elections, the situation with the pandemic “suddenly” worsened in terms of the increasing number of new infected and dead people. Ironically, the authorities accused the irresponsible citizens for pandemic spread. In the meantime, there were doubts regarding the credibility of official data on the number of infected and dead persons in the country. Thus, the trust of citizens in the members of the Government’s Crisis Staff vanished. The announcement of Serbian President about the possibility of introducing a new curfew to bring the epidemic under control caused justified anger among the citizens, and it was the immediate reason for the several days of protests that followed.

The protests began with a spontaneous gathering of hundreds of citizens in front of the National Assembly on the eve of 7 July 2020. After an hour of peaceful gathering of citizens, mostly wearing a mask, and keeping the prescribed distance, the evening events turned into a fierce confrontation between the police and the citizens. Everything started with a violent intrusion into the Assembly’s building of one of the right-wing former MPs and his supporters. The police managed to push them out of the building of the National Assembly in a peaceful way, but then attacks of a certain group followed, primarily young people, who began to provoke the police by throwing stones and torches. The latest was followed by the first police response by pushing the demonstrators, using a stick and then firing large quantities of tear gas into the mass of demonstrators, which caused an unexpected stampede. It is concerning that a large number of people in civilian clothes were present on the streets that evening, who did not have an official police ID and introduced themselves as police officers and equally participated in the beating and arrest of citizens. One of the most brutal footage that appeared on social media that evening is how the police approach and hit three young men sitting on benches with batons, and it is clear that they did not offer any resistance in any way. The second night, 8 July, was followed by a similar scenario.

On this occasion, the evening began with a peaceful protest, frequented by an even larger number of citizens. As the conflicts between the citizens and the police progressed, the police response during the protests became even more brutal. An already seen scenario, a small group of demonstrators, mostly young people, stand right next to the police cordon and start provoking them. The police then responded to the provocation, but not by reacting to the young men in front of them, but to the mass of demonstrators who gathered peacefully. On the streets of Belgrade that evening, various police formations were noticeable, from the cavalry, the Gendarmerie, all the way to the vehicles of the Special Anti-Terrorist Unit. The protests that evening spilled over to other cities in Serbia, such as Novi Sad, Nis, Kragujevac, Smederevo and Krusevac, but the greatest police brutality was recorded in Belgrade and Novi Sad. The protests continued in the following days with a weaker presence of citizens and a calmer intensity.[2]

It is not certain who protested on the streets and against what precisely. The protests were followed by diverse type of protesters. A part of them were representatives of the „boycott“opposition, that participated in the elections, but did not pass the census, to right-wing and extremist organizations, individuals and supporters of conspiracy theories. Most concerning were the pictures of a number of young men, appearing as part of hooligan groups who provoked the police, while some of them also took part in the beating of citizens. State officials and analysts also spoke about the influence of a foreign factor in the protests, since it turned out that among the arrested citizens were ones who have not participated in the protests. The target of the attack by the police and protesters were the journalists who were covering the protest. According to the data of the Independent Association of Journalists of Serbia, as many as 29 cases of attacks on journalists, cameramen and photo reporters were recorded, 8 of which were by the police. Impunity for attacks on journalists certainly leads to new attacks. Such treatment of journalists and media workers and the deepening collapse of media freedom can place Serbia among the undemocratic states where all the foundations of democracy and the rule of law have long been shaken.[3]

The excessive use of force and the brutality of the police were obvious. This could be noticed in the layman’s eye on numerous videos and images circulating on social networks. Statements by police and government officials, of course, say the opposite. Even the Ombudsman had a similar opinion, although according to the reports he received, but also in the regular procedure, he initiated the procedure for internal control of the Ministry of Internal Affairs. One of the most terrifying example of police brutality is the video in which more than ten members of the Gendarmerie hit a young man with batons who had already been knocked to the floor and showed no resistance. You can view his testimony here. He is just one of a dozen citizens who reported to the Belgrade Center for Human Rights and other organizations in those days for legal assistance because they were victims of police torture.

The express proceedings before the Court in which the arrested citizens were sentenced to surprisingly long prison sentences. 43 convictions were handed down. Almost half of these verdicts were passed on the basis of the police officers’ statements, while the Court did not accept the citizens’ statements as true. A total number of 82 misdemeanor proceedings have been conducted, of which only 9 were acquittals, while 30 are still pending. According to CINS, the judges described the police officers’ statements as “convincing, logical and impartial”. Citizens were convicted for carrying torches, attacking public property, but also for insulting police officers. The verdicts analyzed by CINS show that defendants for the same things received drastically different sentences.[4]

The events from the beginning of July once more confirmed the situation in which the society in Serbia is found. The captured state, collapsed institutions, lack of democracy and the rule of law, accumulated dissatisfaction and the anger of the citizens, culminated in those days on the streets of Belgrade. Anyone who looked at the pictures from Serbia from the beginning of July could rightly say that the citizens of Serbia live in a hybrid regime[5] in which basic civic freedoms are obstructed[6].

Ivana Teofilović works in Civic Initiatives as a Public Policy Program Coordinator. She regularly monitors and reports on the basic civic freedoms (freedom of association, freedom of assembly and freedom of expression ) that provide a enabling environment for the civil society organizations.