You are at:Home»New in CSDev»BCSDN News»IPA CSF 2007-2011: Evolution not Revolution – The EC and Civil Society Have Both Capacities to Live up to and Beyond the 2% Commitment

In 2009, BCSDN published a policy paper critical of the IPA Civil Society Facility (CSF) design. Then, the EC failed to properly consult and reflect on the lessons-learned on supporting the role of civil society in the EU accession process and also failed to develop an approach complementary to the needs of indigenous local CSOs. Three years on, BCSDN has undertaken a comprehensive overview of the IPA CSF grant support implemented so far. The research has led to the publication of Infograph: IPA CSF 2007-2011: Evolution not Revolution as the first in a series of analytical products to be published on the topic this year.

Overall, the European Commission’s (including EU Delegations’) approach and support had evolved, but not yet revolutionized in the way needed for the transformative power and democratizations role of civil society to be one of the key factors determining the EU accession process. What is needed is support in strengthening and building a sustainable base for development of civil society in Enlargement countries based on 4 principles: coherence, ownership, sustainability and cost- effectiveness.

What do the figures show?

In announcing IPA CSF in 2007, the Commission made a commitment to triple the support provided to civil society in comparison to the CARDS instrument. In relative terms, this meant a commitment of 2% of IPA being allocated to civil society activities. Concretely, 107,3 million EUR has been made available under the IPA CSF in the period 2007-2011. But while the Commission’s allocation for IPA have been rising throughout the years, the allocations for IPA CSF remained at the same level, resulting in initial 2,2% of IPA to drop to 1,2% of IPA being allocated to IPA CSF. The EC should live up to the 2% commitment that it has made.

But, when observing some of the factors determining the absorption capacity, it is clear that both local CSO and the Commission/EUDs have leverage available not only to live up, but to potentially strengthen the 2% commitment made. For over 41 million EUR or 285 grants managed via 26 CfP so far:

• The Commission/EUDs have reviewed project proposal on average within 3-5 months (including up to even 150 proposal review per CfP);

• In regional (Partnership Action) project, 34 out of 68 leader organizations (50%) have been CSOs from IPA beneficiary countries;

• In comparison to Governments, CSOs capacity to absorb IPA funds is much greater, considering the 68% of absorption of IPA Component I by Government vs. 99% of IPA CSF absorption by CSOs. 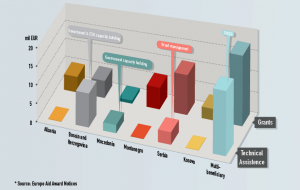 While the grants have been the dominant aid modality used under the IPA CSF, technical assistance (TA) has been used extensively at both the regional level (TACSO)1 and in some countries. In Bosnia and Herzegovina and Macedonia, where TA has dominated the IPA CSF support, it is clear that lack of political will for development and cooperation with civil society cannot be tackled in a technical and administrative manner. In Serbia, using TA for grant management support seems to be helping in providing swift, transparent and effective grant making procedures and this provides further potential for the 2% to be fulfilled.

Quality vs. Quantity: The data issue?

An unexpected problem that the research stumbled upon is the issue of availability of data on projects funded under IPA CSF. In 2008, the Commission alongside other major global donors has signed up to the International Aid Transparency Initiative (IATI) standards. However, IPA – including IPA CSF support – is not yet the subject of the publication of data according to IATI. In short, once and if the award notice for grants is published, data on the project implementation are rarely available.

Stayed tuned for our other analytical products on IPA CSF and read our previous positions, analysis etc. from the monitoring of the Enlargement policy and IPA support to civil society here.