You are at:Home»New in CSDev»BCSDN News»Presentation of MM Regional Report 2020: Challenging Environment for Western Balkans’ CSOs Development in Times of Pandemic

On 12th July 2021, BCSDN held an online event to present the primary findings and key recommendations of the Monitoring Matrix Regional Report on Enabling Environment for Civil Society Development in the Western Balkans for 2020. The event was followed by more than 40 CSOs, donors and EU representatives from the region and across Europe, who gained information on the major developments that affected the overall civil society functioning in the Western Balkans in times of pandemic. 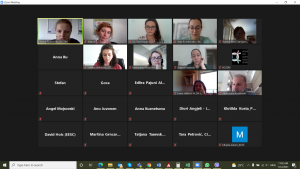 Ms. Biljana Spasovska, BCSDN’s Executive Director, opened the event reflecting that 2020 was more than a health crisis for the Western Balkans as it has further highlighted the fragility of existing economic, legal and political systems. She noted the lack of serious countries’ advancement in the EU accession process in times of democratic backsliding in almost all countries in the region, especially when many civic space violations and restrictions occurred under the pretense of fighting the pandemic. On a positive note, she emphasized the civil society role in times of crisis, finding new ways to serve its communities, especially the most vulnerable ones, online and offline, and CSOs’ recognition in the process. Ms. Spasovska has further provided a brief overview of the Monitoring Matrix methodology, which as a comprehensive tool was developed back in 2012.

At the beginning of her presentation, Ms. Anja Bosilkova- Antovska, BCSDN’s Policy and Advocacy Coordinator, captured essential circumstances on how the Covid-19 has impacted the civil society in the region, such as: serious restrictions and violations on freedom of assembly and expression, the decrease of public funding, and the redirection of foreign funds to crisis relief mechanisms; the lack of government-CSOs coordination, and inclusion of the CSOs in crisis management bodies and crisis relief packages, etc. 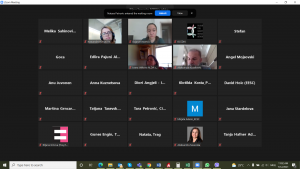 Focusing on the 3 key areas of the report: Basic Legal Guarantee of Freedoms, CSOs’ Financial Viability and Sustainability, and Government – CSO Relationship, Ms. Bosilkova-Antovska profoundly reflected on some of the key civil society developments across the region during 2020.

Concerning the first area, Basic Legal Guarantee of Freedoms, no changes were noted to the main laws regarding freedom of assembly. At the same time, violent obstructions and attacks on protesters in many instances throughout the region occurred. No significant difficulties were recognized in practicing freedom of association and CSOs’ registration, either with a worrisome trend with the existence of GONGOs and PONGOs in Serbia and BiH discrediting CSOs’ efforts and credibility. Ms. Bosilkova-Antovska also addressed the problematic anti-money laundering legislation in some countries and the governments’ usage of anti-money laundering and anti-terrorist financing methods to intimidate and restrict civil society operations. Although there have been no legal changes regarding freedom of expression, the governments’ restrictions and attacks against media and journalists in some countries continued.

In regards to the CSOs’ Financial Viability and Sustainability, supportive tax measures were noted in some of the countries, although this was a problematic and challenging issue for the rest of the region. There were also unsupportive measures regarding donations and corporate giving. The crisis has also affected the amount of state funds for CSOs; there were problems concerning the transparency of funding distribution, the unavailability of institutional funding, the lack of effective monitoring and evaluation of the public funding distribution, etc. Moreover, unstimulating law on volunteering, and uncomprehensive statistics and data on CSOs’ employees and volunteers were recognized as ongoing problems in most Western Balkans countries. 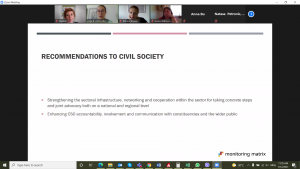 Concerning the involvement in policy and decision-making processes, as a part of Government- CSO Cooperation, CSOs continued reporting ineffective, non-meaningful involvement in decision and policy-making, especially on the national level. Opportunities for public participation or consultation have declined due to the pandemic, and the online platforms for consultations were not effectively used, either. On the other hand, CSOs had an essential role in providing social services to a wide range of beneficiaries amid the crisis. They have also been engaged in providing free legal aid, consumer protection, assistance in education, healthcare, etc. At the end of her presentation, Ms. Bosilkova-Antovska presented the specific recommendations for the national governments, as well as for other stakeholders– civil society, donors and recommendations regarding the EU integration process.

The event concluded with participants’ discussion and recommendation on the future improvement of the report and CSOs’ efforts in promoting and providing an enabling environment for civil society development in the Western Balkans.

We look forward to your feedback and to a further discussion on this issue. For more information, please reach out to us at: executiveoffice@balkancsd.net.