You are at:Home»New in CSDev»BCSDN News»WBT Civil Society in the New Geopolitical Reality: A Crisis as an Opportunity for Restoring EU Enlargement Credibility?

Following the publication of the annual European Commission Enlargement Package 2022, BCSDN is issuing the 13th background analysis assessing the progress made in the area of civil society development and dialogue with public institutions in Enlargement countries, based on the monitoring methodology set up by BCSDN’s Monitoring Matrix on Enabling Environment for Civil Society Development.

The methodology underpins the annual monitoring led by BCSDN and its members in all Enlargement countries and is also reflected in this policy brief by highlighting key issues addressed, but also left out of the EC reports. The Monitoring Matrix has been recognized by the European Commission and has inspired the development of the Guidelines for EU Support to Civil Society in Enlargement Countries, 2014-2020.

Civil society continues to be screened within the Political criteria as one of the four pillars of Democracy, yet again, incoherently and in varying detail across countries with an absence of a direct or systematic reference to the Guidelines for EU Support to Civil Society in Enlargement Countries. EC acknowledges civil society as a strong partner in advancing the priority areas of the fundamentals agenda. It again highlights that “an empowered civil society is a crucial component of any democratic system and should be recognised and treated as such by public institutions”. North Macedonia, Kosovo, and – for the first time – Albania are the countries that have put this recommendation into practice – recognizing and treating civil society as a key aspect of the democratic reforms. 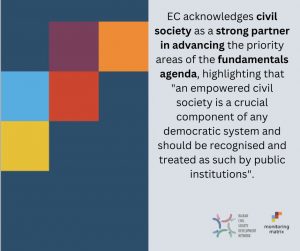 The 2022 Enlargement Package came in the wake of radical geo-political and economic developments in Europe but brings a few novelties. Following a quick decision to grant candidate status to Ukraine and Moldova, the EC has finally recommended “conditional” candidate status to Bosnia and Herzegovina, six years after submitting its application for membership. North Macedonia and Albania, after years of blockade, held the first intergovernmental conferences marking the start of their negotiation process. Kosovo, on the other hand, was not granted the long-awaited visa liberalisation, despite the political stability and the national authorities’ commitment to Kosovo’s European path. The package has highlighted Serbia’s lack of alignment with EU’s common foreign and security policy due to their reluctance to impose restrictions on Russia in response to the Russian aggression towards Ukraine. A worrying language has been used in regard to Türkiye in several areas including democracy, the rule of law and fundamental rights, with Türkiye’s accession negotiations effectively coming to a standstill. Although the reports suggest Montenegro and Serbia are to have an overall balance in the progress, “limited” progress is noted in several essential areas including the freedom of expression and media freedom.

The full analysis is available here.